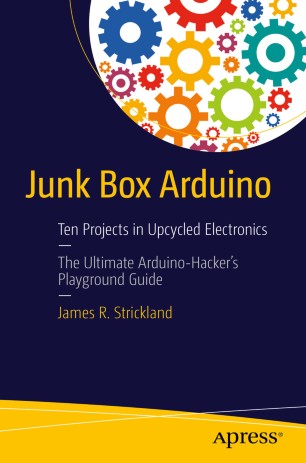 We all hate to throw electronics away. Use your 5 volt Arduino and have fun with them instead! Raid your electronics junk box to build the Cestino (Arduino compatible) board and nine other electronics projects, from a logic probe to a microprocessor explorer, and learn some advanced, old-school techniques along the way. Don’t have a well-stocked junk box? No problem. Nearly all the components used in these projects are still available (and cheap) at major electronic parts houses worldwide.

Junk Box Arduino is the ultimate have-fun-while-challenging-your-skills guide for Arduino hackers who’ve gone beyond the basic tutorials and are ready for adventures in electronics.

James Strickland has been using computers since the days of the Commodore 64 and the IBM PC XT. He spent most of his undergraduate, graduate, and professional careers in technical support and system administration, explaining computers to other people. He's used Unix-like OSs in various incarnations from Ultrix32 in the early 1990s to Slackware Linux in the mid '90s to OS X, Raspbian, and Xubuntu today, as well as non-Unix-like OSes such as MS-DOS, Windows, Macintosh System 7, CP/M-80, and so on. He got his first Arduino clone (A Boarduino kit from Adafruit Industries) in 2010. Soldering that little board together was his very first success in digital electronics below the "Insert board, load driver" level. He's also known for his Post-Cyberpunk novels Looking Glass and Irreconcilable Differences, and for his novella On Gossamer Wings.

“The intended audience is individuals who like to tinker with technology ... . The book is more tutorial than cookbook, and the writing style is clear and pedagogically sound. ... for the motivated reader, the work serves its purpose well. Summing Up: Recommended. All readers.” (C. Vickery, Choice, Vol. 54 (7), March, 2017)
Buy options