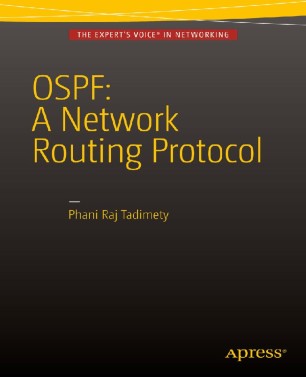 Learn how routers network using the OSPF (Open Shortest Path First) protocol and unpick Dijkstra’s Network Algorithm to see how OSPF performs the calculations to determine the shortest or most appropriate path between two routers. OSPF: A Network Routing Protocol dives deep into the OSPF protocol without sacrificing simplicity in language. All of this is done with running examples and illustrations to clarify concepts and enhance the enjoyment of networking.

OSPF: A Network Routing Protocol is an absorbing, comprehensible account of OSPF, including the algorithm which is used for calculating its routes. While OSPF has traditionally been an organizational networking protocol, in these exciting times of Software Defined Networking (SDN), it has assumed an important role in the consolidated data center too. Now that the traditional distinctions between server and network roles are getting blurred, everyone in the data center needs to become familiar with networking and networking protocols!

Tadimety Phani Raj  is an Information Security evangelist with considerable experience in networking. He has a total of 14 years of experience in the IT Industry. His last assignment was at IBM, Bangalore, where he provided functional guidance to WW Global Delivery Centers with regard to IT security, privacy, and compliance.