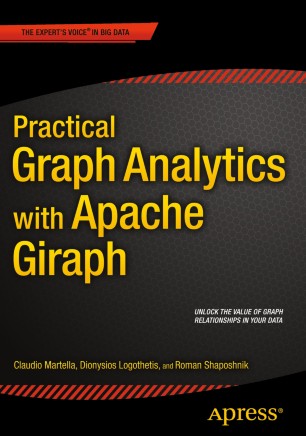 Graphs arise in a wealth of data scenarios and describe the connections that are naturally formed in both digital and real worlds. Examples of such connections abound in online social networks such as Facebook and Twitter, among users who rate movies from services like Netflix and Amazon Prime, and are useful even in the context of biological networks for scientific research. Whether in the context of business or science, viewing data as connected adds value by increasing the amount of information available to be drawn from that data and put to use in generating new revenue or scientific opportunities.

Apache Giraph offers a simple yet flexible programming model targeted to graph algorithms and designed to scale easily to accommodate massive amounts of data. Originally developed at Yahoo!, Giraph is now a top top-level project at the Apache Foundation, and it enlists contributors from companies such as Facebook, LinkedIn, and Twitter. Practical Graph Analytics with Apache Giraph brings the power of Apache Giraph to you, showing how to harness the power of graph processing for your own data by building sophisticated graph analytics applications using the very same framework that is relied upon by some of the largest players in the industry today.