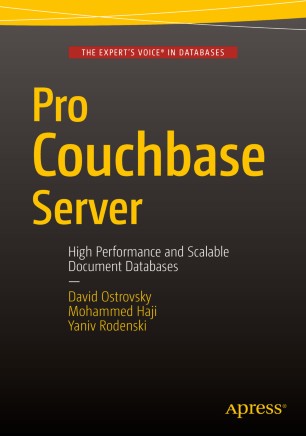 This new edition is a hands-on guide for developers and administrators who want to use the power and flexibility of Couchbase Server 4.0 in their applications. The second edition extends coverage of N1QL, the SQL-like query language for Couchbase. It also brings coverage of multiple new features, including the new generation of client SDKs, security and LDAP integration, secondary indexes, and multi-dimensional scaling. Pro Couchbase Server covers everything you need to develop Couchbase solutions and deploy them in production. The NoSQL movement has fundamentally changed the database world in recent years. Influenced by the growing needs of web-scale applications, NoSQL databases such as Couchbase Server provide new approaches to scalability, reliability, and performance. Never have document databases been so powerful and performant. With the power and flexibility of Couchbase Server, you can model your data however you want, and easily change the data model any time you want. Pro Couchbase Server shows what is possible and helps you take full advantage of Couchbase Server and all the performance and scalability that it offers.

When he was nine years old, little David Ostrovsky found a book in Russian entitled (in English) Electronic Computational Machines at the local library. After reading it cover-to-cover in a single weekend, he decided what he was going to do with his life. Three years later, he finally got to touch a computer for the first time and discovered that it was totally worth the wait. One thing led to another, and now he’s a senior solutions architect at Couchbase. David is a software developer with more than 16 years of industry experience as a speaker, trainer, blogger, and coauthor of the book Pro Couchbase Server, published by Apress Media, and author of the Microsoft official courses "Essentials of Developing Windows Store Apps Using C#” and “Advanced Windows Store App Development Using C#” (20484, 20485). In addition, he has written numerous articles. He specializes in big data architecture and large-scale distributed systems.