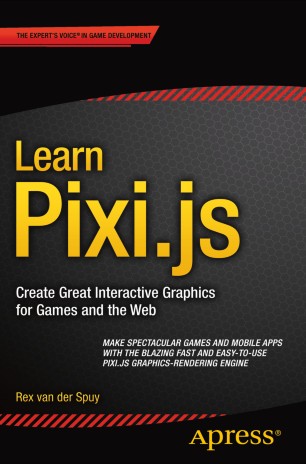 Create Great Interactive Graphics for Games and the Web

Create and display interactive graphics, build scenes and animated transitions, make cross-platform, responsive games and applications for multiple screen resolutions, and use Pixi.js’s spectacular WebGL rendering effects. Learn how to create applications for desktop and touch-screen devices, and how to use the best open-source plugins to extend Pixi.js’s capabilities in a myriad of exciting ways.

Learn Pixi.js is a fun and practical brief introduction to using the powerful Pixi.js graphics-rendering engine for making websites, games and mobile apps.

Rex van der Spuy is a video game designer and writer. He s written Foundation Game Design with Flash, Advanced Game Design with Flash and Foundation Game Design with AS3.0. Rex has designed games and done interactive interface programming Agency Interactive (Dallas), Scottish Power (Edinburgh), DC Interact (London), Draught Associates (London), and the Bank of Montreal (Canada). He also builds game engines and interactive interfaces for museum installations for PixelProject (Cape Town). In addition, he created and taught advanced courses in game design for the Canadian School of India (Bangalore, India). When not writing about games, making them, or playing them, he amuses himself by building experimental, autonomous, self-aware, multi-cellular parallel universes out of shoe boxes, scotch tape, spare milk bottle caps and bits of string . He claims, that this is a lot more entertaining than you might think, but we re skeptical.

“It learns you to use the Pixi.js graphic rendering engine by example. … I would like to pay special attention to the introduction, which is really well-written (I enjoyed it) and where you learn how to set the PIXI environment. … If you are looking for a PIXI book, written in a great & easy language with examples – that’s a good match! Enjoy it!” (Vitosh Academy, vitoshacademy.com, December, 2015)