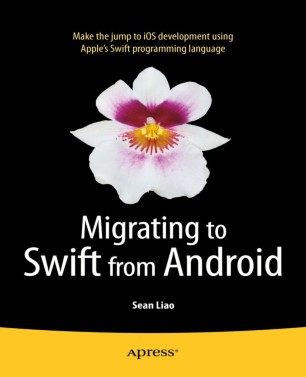 Migrating to Swift from Android

After the short IDE setup guide, this book continues by providing guidance on how to translate your existing Android apps to iOS. Every topic comes with a tutorial project; you'll plan and structure your iOS apps following a typical top-down process using Xcode Storyboards. To implement use cases, you'll cover common mobile topics, including user interfaces, managing data, and networking with remote services. As you move through Part 2 of this book, you'll create simple and meaningful iOS apps with rich UI components to handle common CRUD operations locally and remotely.

Part 3 demonstrates the whole porting process by translating a typical mobile app from Android to iOS 8 from start to finish. When you finish reading Migrating to Swift from Android, you'll be an iOS developer as well as an Android developer. And, you will be fully convinced you can create iOS apps just like you do in Android. In most cases, it is a waste not to port your native Android apps to iOS.

Sean Liao (PMP@) has been written mobile code for PalmOS, JavaME, Microsoft .NETCF, and BlackBerry, and he also has some Nokia Symbian experience since 2000. In 2009, Sean started iOS programming, and then began Android programming the same year by following the same porting strategy, based on years of hands-on mobile programming experience. Currently, Sean is primarily engaged in creating iOS apps and porting them to Android as a bonus.