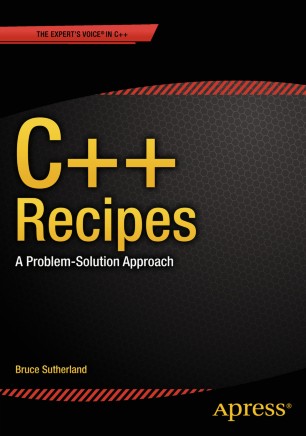 C++ Recipes: A Problem-Solution Approach is a handy code cookbook reference guide that cover the latest C++ 14 as well as some of the code templates available in the latest Standard Template Library (STL).

This is a "must have", contemporary reference for your technical library.

Bruce Sutherland is a video game programmer hailing from Dundee, Scotland. He graduated with a Bsc (Hons) Computer Games Technology from the University of Abertay, Dundee in Scotland, graduating in 2005. After graduating he began his first job in the games industry at 4J Studios where he worked on Star Trek: Encounters (PS2), The Elder Scrolls IV: Oblivion (PS3), Star Trek: Conquest (PS2, Wii), Ducati Moto (NDS) and AMF Pinbusters! (NDS). In July 2008 he moved from Dundee to Melbourne Australia where he joined Visceral Studios and was a software engineer on Dead Space (Xbox 360, PS3, PC), The Godfather II (Xbox 360, PS3, PC) and Dead Space 3 (Xbox 360, PS3, PC). He developed an interest in developing for Android in his spare time and writes tutorials on his blog at http://brucesutherland.blogspot.com.