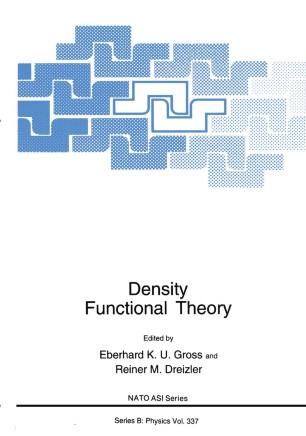 The first Nato Advanced Studies Institute entirely devoted to density functional theory was held in Portugal in September 1983. The proceedings of this School, publis­ hed in early 1985, is still used as a standard reference covering the basic development of the theory and applications in atomic, molecular, solid state and nuclear physics. Ho­ wever, astonishing progress has been achieved in the intervening years: The foundations of the theory have been extended to cover excited states and time dependent problems more fully, density functional theory of classical liquids and superconducting systems has been addressed and extensions to relativistic, that is, field theoretical systems, as well as a more thorough discussion of magnetic field problems have been presented. In addition, new functionals have been devised, for instance under the heading of ge­ neralised gradient expansions, and the number of applications in the traditional fields has steadily increased, in particular in chemistry. Applications in new fields, as for instance the structure of atomic clusters and the marriage of density functional theory with molecular dynamics and simulated annealing, have provided additional impetus to the field of density functional theory.