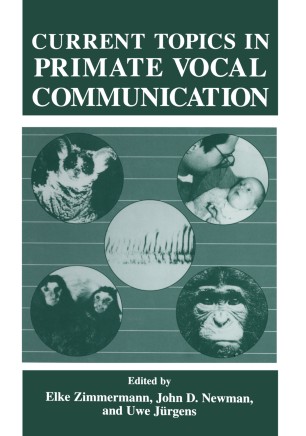 More than 25 years ago, the first major review of primate communication appeared (Altmann, 1967). Since then, information on the communicative abilities of primates increased rapidly, resulting, 15 years later, in the appearance of the first volume in which signaling systems were analyzed in a broader variety of primate groups within an evolutionary perspective (Snowdon, Brown and Petersen, 1982). Seven years later, the first volume dedicated solely to primate vocal communication appeared (Todt, Goedeking and Symmes, 1988) and another four years later a volume followed in which nonverbal vocal communication in non-human primates and human infants was compared (Papousek, Jurgens and Papousek, 1992). None of these volumes, however, provided information about current technical advances in the field of bioacoustics, especially in digital sound analyzing systems, which offer primatologists, anthropologists and linguists nowadays a variety of rapid methods for analyzing human speech and non-human primate vocalizations in a quantitative and comparative way. Choosing the right method is difficult if a synopsis of these tools is lacking. Furthermore, information was particularly lacking on the natural signaling systems of two important primate groups, the prosimians and the apes. Likewise, new and unexpected insights into the ontogeny and evolution of vocal communication were gained during the past few years by the use of highly sophisticated sound analysis and statistical techniques.

`An excellent review of a complex and actively debated topic.'
American Anthropologist