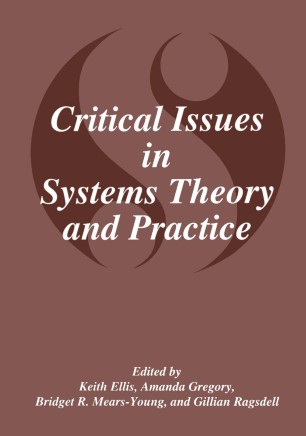 The systems movement, now 40 years old, is made up of many associations of systems thinkers from different disciplines all over the world. The United Kingdom Systems Society (UKSS) was formed in 1978. Today it has over 300 members and is committed to the development and promotion of "systems" philosophy, theory, concepts and methodolo­ gies for improving decision making for the benefit of organizations and wider society. The first UKSS International Conference was held at the University of Hull in July ofHuddersfield 1989. Since then we have held International Conferences at the Universities (1991) and Paisley (1993). The UKSS International Conferences are now an established biannual event and this, our fourth international conference, will be jointly hosted by the Universities of Hull and Humberside. Systems science is considered to be a trans-discipline which promotes critical and effective intervention in complex organisational and social problem situations. As such it traverses "hard", through "soft" to "critical" systems thinking and methodologies. Yet, despite the currently robust state of the UKSS the systems movement cannot be described as an international movement: different subdisciplines are at different stages of development and are often engaged in pursuing their own particular interests and themes with little "conversation" between the subdisciplines despite their common interest in systems.