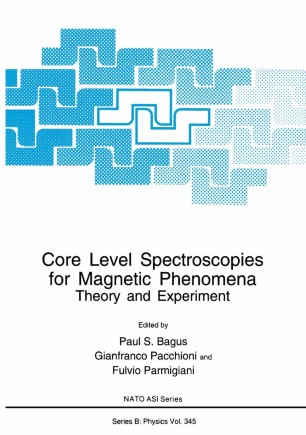 For several years, core level spectroscopies and other, c\osely related, electron spectroscopies have provided very useful information about the atomic composition, the geometric structure, and the electronic structure of condensed matter. Recently, these spectroscopies have also been used for the study of magnetic properties; such studies have a great potential to extend our knowledge and understanding of magnetic systems. This volume collects the lectures presented at the NATO Advanced Study Institute on "Core Level Spectroscopies for Magnetic Phenomena: Theory and Experiment" held at the Ettore Majorana Centre, Erice, Sicily, on 15 to 26 May 1994. The topics considered at the ASI covered a wide range of subjects involving the use of core-level and related spectroscopies to study magnetic phenomena. There are a large and growing number of applications of these spectroscopies to the study of magnetic materials; an important objective of the ASI was to stimulate further growth. The topics covered at the ASI can be placed into three general groups: 1) fundamental principles of core level spectroscopies; 2) basic aspects of magnetic phenomena; and, 3) the combination of the two previous topics embodied in applications of the spectroscopies to magnetism. In all three groups, theoretical interpretations as weH as experimental measurements were presented, often both of these aspects were covered in a single lecture or series oflectures. The theoretical treatments ofthe spectroscopies as weH as of the magnetic phenomena help to establish a framework for understanding many of the experimental measurements on magnetic materials.