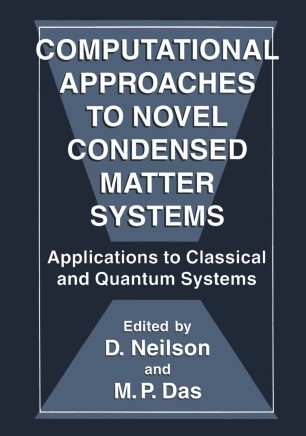 Applications to Classical and Quantum Systems

This volume contains the lectures given at the Third Gordon Godfrey International Workshop on Computational Approaches to Novel Condensed Matter Systems which was held at The University of New South Wales July 12-17, 1993. Lecturers from Asia, Australia, Europe and North America gave a total of twenty-nine lectures which were spread over the five days. Unfortunately we were not able to include in this volume the lectures of S. Das Sarma from the University of Maryland on "Non-Equilibrium Growth as a Self-Organised Phenomenon" due to constraints of time. The workshops have been held annually since 1991 in Sydney, each covering a novel research area in condensed matter physics that is of topical interest. Australia has a strong tradition of research in condensed matter physics. The workshops are jointly organised by the School of Physics at the University of New South Wales (Sydney) and the Department of Theoretical Physics, Research School of Physical Sciences and Engineering at the Australian National University (Canberra). The late Gordon God­ frey was an Associate Professor of Physics at the University of New South Wales. He bequeathed his estate for the promotion and teaching of theoretical physics within the university. The primary purpose of each workshop is to expose post-graduate students in physics to both informal interaction and formal lectures from recognised international leaders in topical research areas. Past experience has demonstrated again and again that to be informed about a new field there is no substitute for personal contact and interaction.