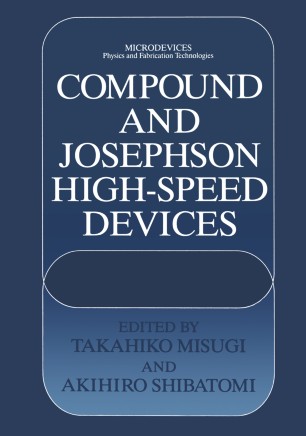 In recent years, III-V devices, integrated circuits, and superconducting integrated circuits have emerged as leading contenders for high-frequency and ultrahigh­ speed applications. GaAs MESFETs have been applied in microwave systems as low-noise and high-power amplifiers since the early 1970s, replacing silicon devices. The heterojunction high-electron-mobility transistor (HEMT), invented in 1980, has become a key component for satellite broadcasting receiver systems, serving as the ultra-low-noise device at 12 GHz. Furthermore, the heterojunction bipolar transistor (HBT) has been considered as having the highest switching speed and cutoff frequency in the semiconductor device field. Initially most of these devices were used for analog high-frequency applications, but there is also a strong need to develop high-speed III-V digital devices for computer, telecom­ munication, and instrumentation systems, to replace silicon high-speed devices, because of the switching-speed and power-dissipation limitations of silicon. The potential high speed and low power dissipation of digital integrated circuits using GaAs MESFET, HEMT, HBT, and superconducting Josephson junction devices has evoked tremendous competition in the race to develop such technology. A technology review shows that Japanese research institutes and companies have taken the lead in the development of these devices, and some integrated circuits have already been applied to supercomputers in Japan. The activities of Japanese research institutes and companies in the III-V and superconducting device fields have been superior for three reasons. First, bulk crystal growth, epitaxial growth, process, and design technology were developed at the same time.