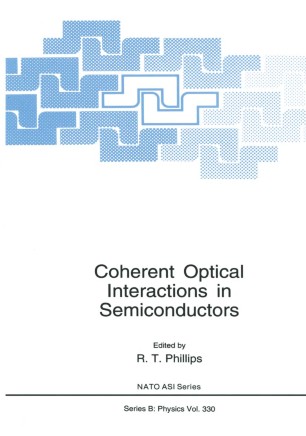 The NATO Advanced Research Workshop on Coherent Optical Processes in Semiconductors was held in Cambridge, England on August 11-14,1993. The idea of holding this Workshop grew from the recent upsurge in activity on coherent transient effects in semiconductors. The development of this field reflects advances in both light sources and the quality of semiconductor structures, such that tunable optical pulses are now routinely available whose duration is shorter than the dephasing time for excitonic states in quantum wells. It was therefore no surprise to the organisers that as the programme developed, there emerged a heavy emphasis on time-resolved four-wave mixing, particularly in quantum wells. Nevertheless, other issues concerned with coherent effects ensured that several papers on related problems contributed some variety. The topics discussed at the workshop centred on what is a rather new field of study, and benefited enormously by having participants representing many of the principal groups working in this area. Several themes emerged through the invited contributions at the Workshop. One important development has been the careful examination of the two-level model of excitonic effects; a model which has been remarkably successful despite the expected complexities arising from the semiconductor band structure. Indeed, modest extensions to the two level model have been able to offer a useful account for some of the complicated polarisation dependence of four-wave mixing signals from GaAs quantum wells. This work clearly is leading to an improved understanding of excitons in confined systems.