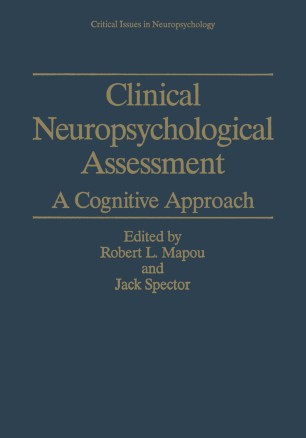 Practicing neuropsychologists and students in clinical neuropsychology must increas­ ingly cross disciplinary boundaries to understand and appreciate the neuroanatomical, neurophysiological, and neuropharmacological bases of cognition and behavior, cur­ rent cognitive theory in many different domains of functioning, and the nature and tools of clinical assessment. Although the cognitive functions and abilities of interest are often the same, each of these fields has grappled with them from sometimes very different perspectives. Terminology is often specific to a particular discipline or ap­ proach, methods are diverse, and the goals or outcomes of study or investigation are usually very different. This book poises itself to provide a largely missing link between traditional approaches to assessment and the growing area of cognitive neuropsy­ chology. Historically, neuropsychology had as its central core the consideration of evidence from clinical cases. It was the early work of neurologists such as Broca, Wernicke, Hughlings-Jackson, and Liepmann, who evaluated and described the behavioral cor­ relates of prescribed lesions in individual patients and focused investigation on the lateralization and localization of cognitive abilities in humans. An outgrowth of those approaches was the systematic development of experimental tasks that could be used to elucidate the nature of cognitive changes in individuals with well-described brain lesions.

`The book is a useful introduction to the main current problems of neuropsychological assessment.'
Neuropsychologia

`This book does more than fill a gap; it provides a needed link between rich and growing cognitive neuropsychology literature and the practice of clinical neuropsychology.'
from the Foreword by Catherine A. Mateer
Buy options