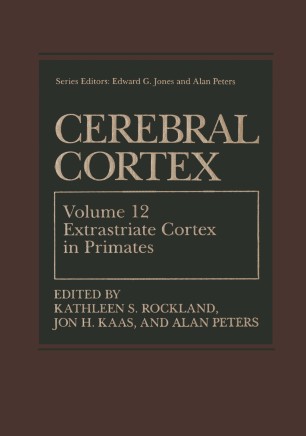 Over the last twenty-five years, there has been an extensive effort, still growing for that matter, to explore and understand the organization of extrastriate cor­ tex in primates. We now recognize that most of caudal neocortex is visual in some sense and that this large visual region includes many distinct areas. Some of these areas have been well defined, and connections, neural properties, and the functional consequences of deactivations have been studied. More recently, non­ invasive imaging of cortical activity patterns during visual tasks has led to an expanding stream of papers on extrastriate visual cortex of humans, and results have been related to theories of visual cortex organization that have emerged from research on monkeys. Against this backdrop, the time seems ripe for a review of progress and a glance at the future. One caveat important to emphasize at the very onset is that the reader may be puzzled or confused by the use of different terminologies. Individual investi­ gators commonly tend to favor different terminologies, but in general some prove more advantageous than others. As discussed by Rowe and Stone (1977) as well as by others, there is an unfortunate tendency for role-indicating names to lead to fixed ideas about function, in contrast to those that are more neutral and adaptable to new findings.