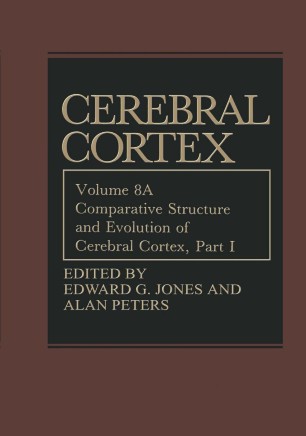 Comparative Structure and Evolution of Cerebral Cortex, Part I

Part of the Cerebral Cortex book series (CECO, volume 8A)

The cerebral cortex, especially that part customarily designated "neocortex," is one of the hallmarks of mammalian evolution and reaches its greatest size, relatively speaking, and its widest structural diversity in the human brain. The evolution of this structure, as remarkable for the huge numbers of neurons that it contains as for the range of behaviors that it controls, has been of abiding interest to many generations of neuroscientists. Yet few theories of cortical evo­ lution have been proposed and none has stood the test of time. In particular, no theory has been successful in bridging the evolutionary gap that appears to exist between the pallium of nonmammalian vertebrates and the neocortex of mam­ mals. Undoubtedly this stems in large part from the rapid divergence of non­ mammalian and mammalian forms and the lack of contemporary species whose telencephalic wall can be seen as having transitional characteristics. The mono­ treme cortex, for example, is unquestionably mammalian in organization and that of no living reptile comes close to resembling it. Yet anatomists such as Ramon y Cajal, on examining the finer details of cortical structure, were struck by the similarities in neuronal form, particularly of the pyramidal cells, and their predisposition to laminar alignment shared by representatives of all vertebrate classes.