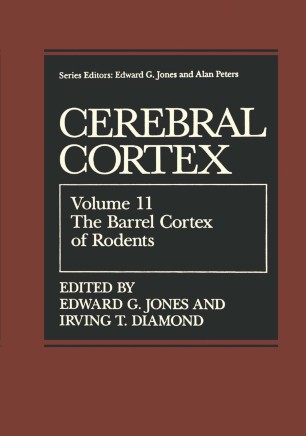 The Barrel Cortex of Rodents

The barrel area is a unique specialization of the cerebral cortex, shared by many species of rodents and some marsupials, in which the somatotopic map of the body surface receives direct morphological expression. Here, the homogeneous sheet of layer IV granule cells seen in most mammals is fractured into large archipelagos, each representing one of the larger subdivisions of the contra­ lateral half-body. Within these larger domains are smaller aggregates of granule cells that contain the concentrated terminations of thalamocortical fibers bear­ ing messages emanating from constellations of receptors located in finer subdi­ visions of a body part. These smaller aggregates are particularly well-defined in the representation of the face, where they form a one-to-one representation of the sinus hairs or vibrissae and where they have been given the name barrels. The first inklings of the unique structure of the parietal cortex of rodents came in the study of Droogleever-Fortuyn (1914), who remarked on the pres­ ence in it of clouds of granule cells 0. 5-1 mm in diameter, which he thought were in some way associated with concentrations of nerve fibers. Little attention, however, was paid to his observations. Lorente de N 6 (1922) later observed dense focal concentrations of afferent fiber ramifications in Golgi preparations of the mouse cortex, calling them glomeruli, and these can now be seen as the structures that form the hearts of the barrels and around which the granule cells concentrate.

From reviews of previous volumes:

`An invaluable source of information for all those interested in the brain.'-Trends in Neurosciences 'The most valuable reference work on the cerebral cortex currently available to neuroscientists.'
Journal of Anatomy