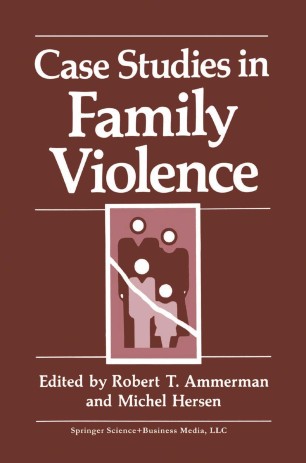 The past 20 years have seen the emergence of family violence as one of the most critical problems facing society. The alarming incidence figures of abuse and neglect directed toward family members justify this atten­ tion. For example, over 1 million children are thought to be abused and neglected each year. Similarly, almost 2 million women are victims of wife battering each year. Annual rates of elderly mistreatment are thought to be as high as 32 per 1000 population. Accurate epidemiologi­ cal data only now are being compiled on more recently recognized forms of mistreatment, such as psychological abuse, ritualistic abuse of chil­ dren, and child witnessing of adult violence. The pervasiveness of do­ mestic mistreatment makes it a priority for clinicians and researchers alike. For clinicians, intrafamilial violence represents a formidable chal­ lenge with respect to assessment and treatment. The etiology of abuse and neglect is multidetermined. There are numerous pathways in the development of family violence, and these interact and converge in a nonlinear fashion. The consequences of family violence are equally com­ plex and divergent. Victims of mistreatment can display a variety of physical injuries and psychological disturbances. No single psychiatric syndrome or symptom constellation has been consistently implicated in any form of family mistreatment. The perpetrators of family violence are equally heterogeneous in their clinical presentations. Illustrative dys­ functions in perpetrators include skill deficits, substance abuse, mental illness, and impulse-control disorders.