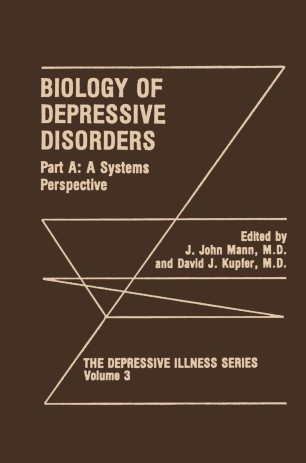 Biology of Depressive Disorders. Part A

This volume is the third in a series on depressive illness. The first volume, entitled Phenomenology of Depressive Illness, is devoted to a de­ scription of depressive illness from a variety of perspectives that include those of the patient, the clinician, and the psychiatric researcher. It de­ scribes the major subtypes of depressive illness and places them in the context of the life cycle. The second volume in this series is entitled Models of Depres­ sive Disorders: Psychological, Biological, and Genetic Perspectives. This volume describes several major models of depressive disorders, in­ cluding genetic, cognitive, interpersonal, intrapsychic, and neurobio­ logical models. The third and fourth volumes deal with the biology of affective disorders in detail. These volumes are distinguished by a triaxial ap­ proach. In Volume III the biology of affective disorders is described from the perspective of individual transmitter systems and neurophysi­ ologic and biologic processes. In Volume IV the biology of depression is addressed from the vantage point of symptom components of de­ pression, and similarities and differences in the biology of depression are described compared to other psychiatric disorders with clinically overlapping features such as anxiety disorders or eating disorders. The effects on biology of comorbid conditions such as anxiety, personal­ ity disorders, alcoholism, and eating disorders are reviewed. These ap­ proaches incorporate issues of state versus trait.