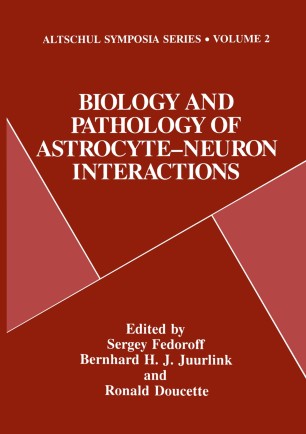 Biology and Pathology of Astrocyte-Neuron Interactions

This volume is made up of papers presented at the Second International Altschul Symposium: Biology and Pathology of Astrocyte-Neuron Interactions. The symposium was held in Saskatoon, Canada at the University of Saskatchewn in May, 1992 in memory of Rudolf Altschul, a graduate of the University of Prague and a pioneer in the fields of the biology of the vascular and nervous systems. Dr. Altschul was Professor and Head of the Department of Anatomy at the University of Saskatchewan from 1955 to 1963. The Altschul Symposia were made possible by an endowment left by Anni Altschul and by other contributions. The symposia are held biennially. One of the greatest challenges for present day scientists is to uncover the mechanisms of brain function. Although cellular anatomy of the nervous system has already been well outlined and indeed was delineated by the beginning of the century, experimental analysis of the function of the brain is relatively recent. The framework of the brain is made up of stellate cells, the astrocytes, which are interconnected by means of their processes, thus presenting a meshwork through which the neurons send their axons, accompanied by oligodendrocytes. Microglia are distributed throughout the brain.