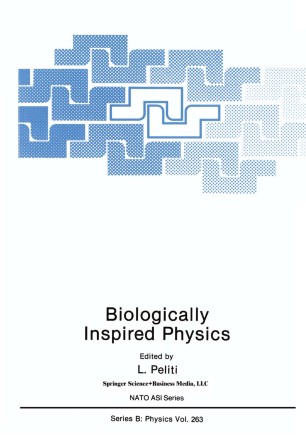 The workshop "Biologically Inspired Physics" was organized, with the support of the NATO Scientific Affairs Division and the Directorate-General for Science, Research and Development of the Commission of the European Communities, in order to review some subjects of physics of condensed matter which are inspired by biological problems or deal with biological systems, but which address physical questions. The main topics discussed in the meeting were: 1. Macromolecules: In particular, proteins and nucleic acids. Special emphasis was placed on modelling protein folding, where analogies with disordered systems in con­ densed matter (glasses, spin glasses) were suggested. It is not clear at this point whether such analogies will help in solving the folding problem. Interesting problems in nucleic acids (in particular DNA) deal with the dynamics of semiflexible chains with torsion and the relationship between topology and local structure. They arise from such biological problems as DNA packing or supercoiling. 2. Membranes: This field has witnessed recent progress in the understanding of the statistical mechanics of fluctuating flexible sheets, such as lipid bilayers. It appears that one is close to understanding shape fluctuations in red blood cells on a molec­ ular basis. Open problems arise from phenomena such as budding or membrane fusion. Experiments on model systems, such as vesicle systems or artificial lipids, have great potential. Phenomena occurring inside the membrane (protein diffusion, ionic pumps) were only discussed briefly.