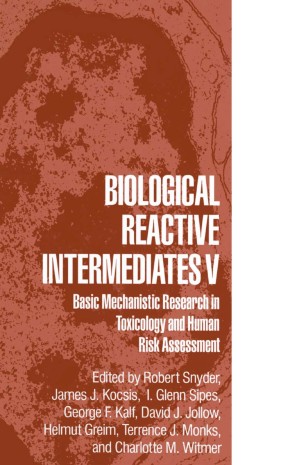 Part of the Advances in Experimental Medicine and Biology book series (AEMB, volume 387)

Much of organic chemistry is based on the ability of suitably structured chemicals to bind together through the formation of covalent bonds. Biochemistry is replete with exam­ ples of enzymatically catalyzed reactions in which normal body constituents can be linked through covalent bonds during the process of intermediary metabolism. The finding that xenobiotic chemicals that enter the body from the environment, are metabolized to highly reactive species, and then covalently react with cellular macromolecules to induce toxic and carcinogenic effects was an observation that spawned the research featured in the Fifth International Symposium on Biological Reactive Intermediates (BRI V). The group of investigators that became fascinated with this process and its signifi­ cance in terms of human health began their discussions in Turku, Finland (J 975), and continued them at Guildford, England (1980), College Park, Maryland (1985), Tucson, Arizona (1990), and Munich, Germany (1995). Among the results were a series of reports listed below, as well as the book for which this serves as the Preface. • Jollow, DJ., Kocsis, J.J., Snyder, R. and Vainio, H. (eds), Biological Reactive Intermediates: Formation, Toxicity and Inactivation, Plenum Press, NY, 1975. • Snyder, R., Park, D.V., Kocsis, J.J., Jollow, D.V., Gibson, G.G. and Witmer, C.M. (eds), Biological Reactive Intermediates II: Chemical Mechanisms and Biological Effects, Plenum Press, N.Y., 1982.