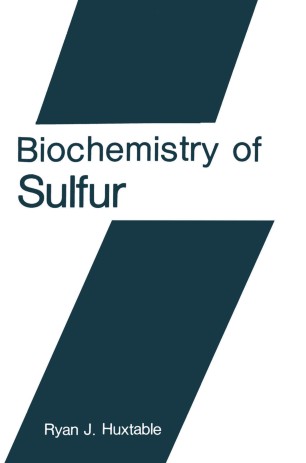 Part of the Biochemistry of the Elements book series (BOTE, volume 6)

There can be few elements with a biochemistry as coherent as that of sulfur. This important element is crucial to myriad aspects of metabo­ lism, catalysis, and structure. The plurality of functions in which sulfur is involved derives squarely from the numerous oxidation states in which it may exist, some having great stability, some being capable of ready redox interconversions, and yet others having great instability. As a result, the flux of sulfur from the geosphere through the various kingdoms of life leaves few biochemical processes unaffected. Although there are large gaps in the fabric of our basic knowledge of sulfur biochemistry, it is sufficiently framed to allow a unified and organized story, a story which many of the best-known names in bio­ chemistry have helped to write. It has been both a task and a privilege to try and summarize this story, one that is enormous, complex, fast­ moving, still developing and, above all, exciting. I suppose that no mo­ nographer of such a vast subject could be satisfied with his efforts. It is unfortunately probable that in attempting this task I have made as many errors as a Stilton cheese has blue streaks, and as many omissions as a Swiss cheese has holes. Perfection is not to be achieved in a monograph. Inasmuch as I have succeeded, the credit belongs to those whose efforts gave us the knowledge we have. Where I have failed, the fault is only mine.