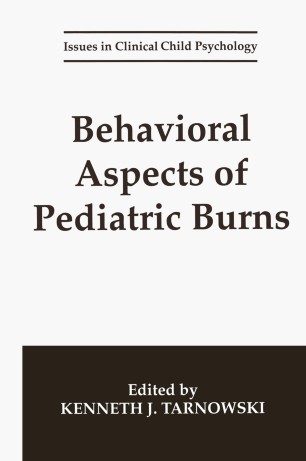 In recent years, considerable professional attention has centered on the behavioral aspects of various childhood illnesses and injuries. Indeed, child health psychology has grown exponentially over the past decade. One index of this growth is found in the number of texts that have recently appeared in the area (Gross & Drabman, 1990; Karoly, 1988; Krasnegor, Arasteh, & Cataldo, 1986; Levine, Carey, Crocker, & Gross, 1982; Routh, 1988; Russo & Varni, 1982; Tuma, 1982; Varni, 1983). In general, these texts provide summaries of the psychological literature across a variety of established (e.g., oncology) and emerging (psychoneuroimmunology) areas of child health. Until recently, many books on the psychological aspects of pediatric health provided no or minimal information about the psychosocial plight of child burn victims. In some instances, pediatric burns might be men­ tioned parenthetically as another example of a population for which behavioral treatment procedures (e. g., pain management) may be of value. In part, the relative inattention devoted to this population may be related to the perception that the literature in this area is sketchy and charac­ terized by significant methodological and substantive shortcomings. In many instances, this perception is largely justified. However, it is also the case that the pediatric burn literature has evolved considerably over the past decade and that the incidence of, and morbidity associated, with severe burn injuries mandates immediate and increased attention by mental health professionals.