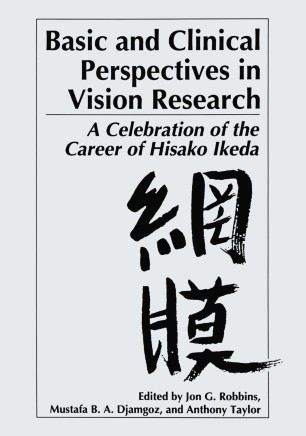 A Celebration of the Career of Hisako Ikeda

I have been asked to write a brief foreword to this volume honoring Hisako Ikeda, providing a review of the accomplishments in our field over the past four decades, when Hisako was an active participant. This I am delighted to do. It has been a most exciting time in vision research and Hisako has been right in the middle of much of the excitement, publishing on a wide variety of topics and providing much new data and many new insights. Hisako's research career can be divided by decades into four quite distinct areas of inquiry. In the 1950s, as a student in Japan, her research interests were psychophysical in nature, and she was concerned with visual illusions, figural aftereffects, and motion detec­ tion. In the 1960s, after her move to London, she began electrophysiological studies. Much of her work in the 1960s was concerned with the electroretinogram (ERG), its components, and the use of this electrical response for evaluating spectral sensitivities of the eye and retinal degenerations. This work represented the beginning of her electrodiagnostic clinical work, which continued until her retirement.