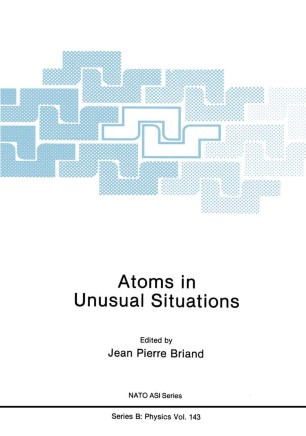 Atomic Physics is certainly the oldest field in which Quantum Mechanics has been used and has provided the most significant proofs of this new theory. Most of the basic concepts, except those more recently developed in field quantization, have been understood for quite a time. Atomic Physics began to serve as a basis for other fields such as molecu­ lar, solid state or nuclear physics. A renewal of interest in Atomic Physics began in the sixties, after the discovery of Quantum Electro­ dynamics, and later when it provided some basic tests of fundamental questions like parity violation, time reversal or Dirac theory. More recently the development of new technologies led to the ex­ ploration of very extreme cases in which the most secrete aspects of atoms have been observed. - Rydberg states where the atoms are so big that they can be described by classical theories; - Heavy or super-heavy ions or exotic atoms where unknown QED or relativistic effects can be observed (very heavy hydrogenlike or helium­ like ions, positron production in very violent collisions ••. ); - Huge external perturbations as those appearing in super-dense plasmas or ultra-high fields. The aim of this school was to gather atomic physicists from all over the world working in all these areas of Atomic Physics.