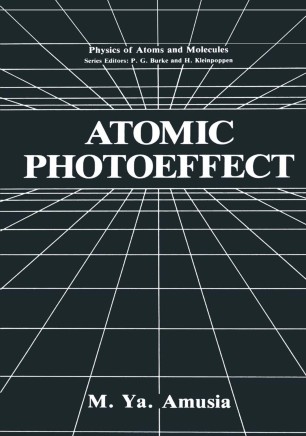 This book is devoted to the investigation of a rather prevalent process in nature: interaction of atoms with electromagnetic radiation. Primary attention is given to the low and intermediate photon energy region, from tens to hundreds of electron-volts. It is in this region that the probability of photon absorption and photoionization is largest. Data in this energy region are very interesting and useful in astrophysics and plasma physics, solid-state physics and quantum electronics, and in a number of other branches of science and technical applications. Formulae for hydrogen atom photoionization are given in almost all textbooks on quantum mechanics. Together with the limited amounts of experimental data available up to the beginning of the sixties, the formulae gave an impression of the completeness of the study of photoionization, of the absolute clarity of the mechanism of the process, and of the possibility of calculating rather easily its probability using the formulae.