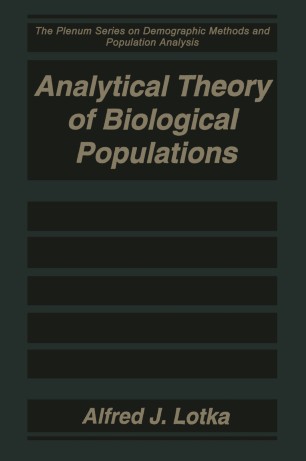 In the 50 years that have passed since Alfred Latka's death in 1949 his position as the father of mathematical demography has been secure. With his first demographic papers in 1907 and 1911 (the latter co­ authored with F. R. Sharpe) he laid the foundations for stable population theory, and over the next decades both largely completed it and found convenient mathematical approximations that gave it practical applica­ tions. Since his time, the field has moved in several directions he did not foresee, but in the main it is still his. Despite Latka's stature, however, the reader still needs to hunt through the old journals to locate his principal works. As yet no exten­ sive collections of his papers are in print, and for his part he never as­ sembled his contributions into a single volume in English. He did so in French, in the two part Theorie Analytique des Associations Biologiques (1934, 1939). Drawing on his Elements of Physical Biology (1925) and most of his mathematical papers, Latka offered French readers insights into his biological thought and a concise and mathematically accessible summary of what he called recent contributions in demographic analy­ sis. We would be accurate in also calling it Latka's contributions in demographic analysis.