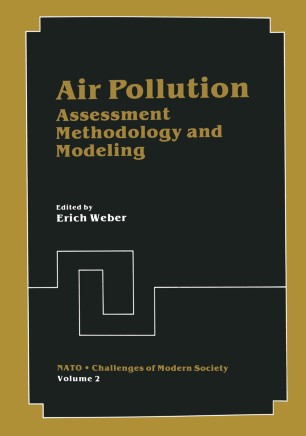 The North Atlantic Treaty Organization (NATO) established the "Committee on the Challenges of Modern Society" (CCMS) at the November 1969 meeting of the North Atlantic Council. The CCMS was charged with developing meaningful environmen­ tal and social programs that complement other international pro­ grams, and with showing leadership, first, in solution of exist­ ing problems and, second, in development of long-range goals for environmental protection in the NATO sphere of influence and in other countries as well. A first Pilot Study on Air Pollution was initiated by the CCMS at its inaugural meeting in December 1969. The United States (Environmental Protection Agency) has been the pilot nation with the Federal Republic of Germany (Federal Minis­ try of the Interior) and Turkey (Scientific and Technical Rese­ arch Council) as co-pilot nations. The Pilot Study on Air Pollution was an action program de­ signed to demonstrate and encourage the utilization of existing knowledge for the development of air quality management programs. It entailed the demonstration of a systems approach to air quali­ ty management. Case studies have been carried out in Ankara, Turkey; Frankfurt, Federal Republic of Germany; St. Louis, U.S.; Oslo, Norway; and South Holland Region, The Netherlands (NATO/CCMS Report No. 6, Appendices A- E).