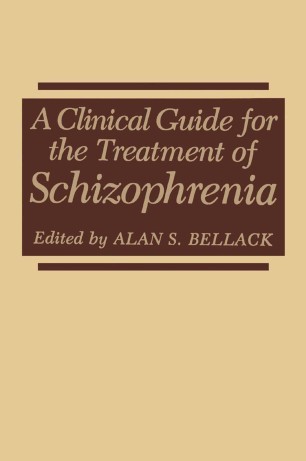 A Clinical Guide for the Treatment of Schizophrenia

Research on the nature and treatment of schizophrenia has undergone a revival and metamorphosis in the last decade. For a long while, the field had been moribund, weighed down by an unreliable diagnostic system, pessi­ mism about the possibility of new discoveries, and a dearth of research funds. A number of factors have seemingly coalesced to change this situa­ tion, with the result that the field is now alive with excitement and optimism. Four factors seem to have played important roles in the resurgence of interest. First, prior to the publication of DSM-III in 1980 there was no reliable diagnostic system for the disorder. Previous definitions were overly general and imprecise. Consequently, the label "schizophrenia" applied to a very heterogeneous group of severely disturhed patients. It was rarely clear whether two investigators had studied comparable samples, making it im­ possible to determine if (flew findings were generalizahle or if failures to replicate were due to the unreliahility of the results or the fact that the investigators had studied different disorders. DSM-III has not totally re­ solved this problem, but it has allowed scientists to reliably identify a much more homogeneous group. As a result, it is now possible to integrate the results of different studies, making it much more likely that we can make important advances. The second important factor was the development of new technologies that promised to help uncover the nature and etiology of the disorder.