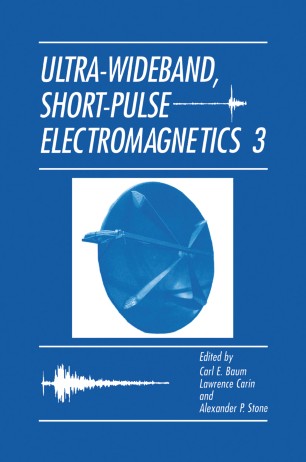 The first two international conferences on Ultra-Wideband (UWB), Short-Pulse (SP) Electromagnetics were held at Polytechnic University, Brooklyn, New York in 1992 and 1994. Their purpose was to focus on advanced technologies for generating, radiating, and detecting UWB,SP signals, on mathematical methods, their propagation and scattering, and on current as well as potential future applications. The success of these two conferences led to the desirability of scheduling a third conference. Impetus was provided by the electromagnetics community and discussions led by Carl Baum and Larry Carin resulted in the suggestion that the UWB conferences be moved around, say to government laboratories such as Phillips Laboratory. Consequently the decision was made by the Permanent HPEM Committee to expand AMEREM '96 to include the Third Ultra-Wide Band, Short-Pulse (UWB,SP 3) with the Third Unexploded Ordnance Detec­ tion and Range Remediation Conference (UXO) and the HPEMINEM Conference in Albuquerque, New Mexico during the period May 27-31, 1996. Planning is now underway for EUROEM '98 in June, 1998 in Tel Aviv, Israel. Joseph Shiloh is the conference chairman. A fourth UWB,SP meeting is planned as a part of this conference and Ehud Heyman will coordinate this part of the meeting. The papers which appear in this volume, the third in the UWB,SP series, update subject areas from the earlier UWB,SP conferences. These topics include pulse generation and detection, antennas, pulse propagation, scattering theory, signal processing, broadband electronic systems, and buried targets.