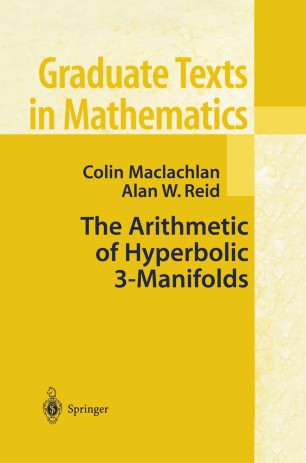 The Arithmetic of Hyperbolic 3-Manifolds

For the past 25 years, the Geometrization Program of Thurston has been a driving force for research in 3-manifold topology. This has inspired a surge of activity investigating hyperbolic 3-manifolds (and Kleinian groups), as these manifolds form the largest and least well-understood class of compact 3-manifolds. Familiar and new tools from diverse areas of mathematics have been utilized in these investigations, from topology, geometry, analysis, group theory, and from the point of view of this book, algebra and number theory. This book is aimed at readers already familiar with the basics of hyperbolic 3-manifolds or Kleinian groups, and it is intended to introduce them to the interesting connections with number theory and the tools that will be required to pursue them. While there are a number of texts which cover the topological, geometric and analytical aspects of hyperbolic 3-manifolds, this book is unique in that it deals exclusively with the arithmetic aspects, which are not covered in other texts.

Colin Maclachlan is a Reader in the Department of Mathematical Sciences at the University of Aberdeen in Scotland where he has served since 1968. He is a former President of the Edinburgh Mathematical Society. Alan Reid is a Professor in the Department of Mathematics at The University of Texas at Austin. He is a former Royal Society University Research Fellow, Alfred P. Sloan Fellow and winner of the Sir Edmund Whittaker Prize from The Edinburgh Mathematical Society. Both authors have published extensively in the general area of discrete groups, hyperbolic manifolds and low-dimensional topology.