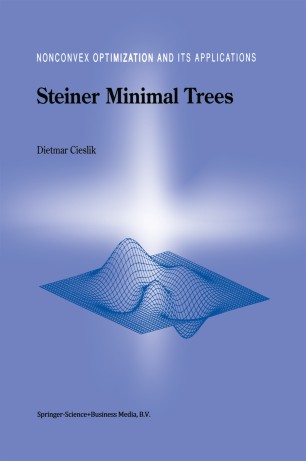 Part of the Nonconvex Optimization and Its Applications book series (NOIA, volume 23)

The problem of "Shortest Connectivity", which is discussed here, has a long and convoluted history. Many scientists from many fields as well as laymen have stepped on its stage. Usually, the problem is known as Steiner's Problem and it can be described more precisely in the following way: Given a finite set of points in a metric space, search for a network that connects these points with the shortest possible length. This shortest network must be a tree and is called a Steiner Minimal Tree (SMT). It may contain vertices different from the points which are to be connected. Such points are called Steiner points. Steiner's Problem seems disarmingly simple, but it is rich with possibilities and difficulties, even in the simplest case, the Euclidean plane. This is one of the reasons that an enormous volume of literature has been published, starting in 1 the seventeenth century and continuing until today. The difficulty is that we look for the shortest network overall. Minimum span­ ning networks have been well-studied and solved eompletely in the case where only the given points must be connected. The novelty of Steiner's Problem is that new points, the Steiner points, may be introduced so that an intercon­ necting network of all these points will be shorter. This also shows that it is impossible to solve the problem with combinatorial and geometric methods alone.