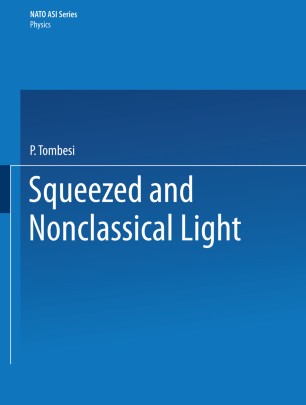 The recent generation in the laboratory of phase squeezed and intensity squeezed light beams has brought to fruition the theoretical predictions of such non-classical phenomena which have been made and developed in recent years by a number of workers in the field of quantum optics. A vigorous development is now underway of both theory and experiment and the first measurements have been coi:Jfirmed and extended already in some half dozen laboratories. Although the fields of application of these novellight sources are as yet somewhat hazy in our minds and some inspired thinking is required along these lines, the pace and excitement of the research is very clear. It is to he hoped that the new possibilities of: making measurements below the quantum shot noise lirnit which is made possible by these squeezed states of light willlead to further fundamental advances in the near future. In this NATO ARW a number of the leaders in the field met in the extremely pleasant surroundings of Cortina d'Ampezzo and their contributions are recorded in this volume. The meeting was held at the Istituto d'Arte which was enjoying its lOOth anniversary celebrations. This ARW was preceeded by an ONR Special Seminar on "Photons and Quantum Fluctuations", the proceedings of which will be published by Adam Hilger Ltd. The timeliness of the meeting was acknowledged by the support of the NATO Scientific Affairs Division which we would like to acknowledge on behalf of all the participants.