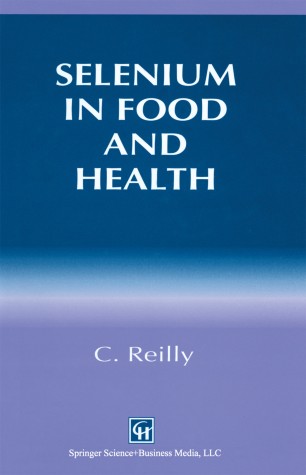 Selenium in Food and Health

Selenium is one of the most intensively studied of the inorganic components of the diet. Ever since it was recognised in the 1950s that the element, which effects, was also an essential had until then been known only for its toxic nutrient, it has attracted growing interest in both human and agricultural fields of science. The literature on selenium is overwhelming. Possibly 100000 publica­ tions dealing with the element have appeared since it was discovered in 1817. They continue to appear in numbers that make it difficult to keep up with even major aspects of the subject. Selenium specialisations have developed, not simply in agriculture and human studies, but also in molecular biology, metabolism, paediatric, enteral and parenteral nutrition, public health, toxicology and environmental health. All are developing their own literature and often an exclusiveness that results in loss of shared ideas and the fruitfullness of cross-boundary communication. This growth of knowledge and exclusiveness can place many readers at a disadvantage since it limits access to important new information. An appreciation of the role played by selenium in metabolism and health is far more than just an extra item in the intellectual database of modern food and health scientists. An understanding of selenium and its functions can enrich our understanding, not just of a single trace nutrient, but also of the many other food components with which selenium interacts.