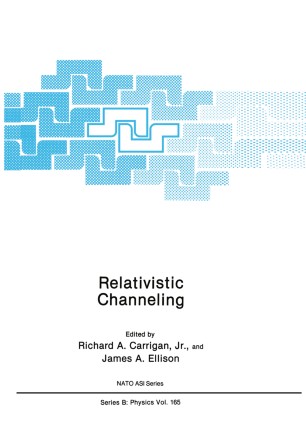 Channeling, by its nature, involves a wide and disparate range of disciplines. Crystal preparation, material science, accelerator physics, sophisticated theoretical analysis and, of course, channeling itself all must work in concert in a research program. In spite of the gulfs separating some of these activities, researchers have drawn together over the last decade to carry out remarkable experiments in relativistic channeling and channeling radiation. Several informal workshops on high-energy channeling have been held over ~he years at Aarhus and Fermilab. However, with the vigorous progress in the field in the last several years it became clear that a more formal, comprehensive workshop was needed along with a book that covered the whole spectrum of the new developments, probed the future, and also laid out some of the foundations of the subject. This volume is the outcome of that process. The organization and preparation of both the volume and the workshop owe much to several outstanding scientific committees. The membership of these included J. Andersen (Aarhus), S. Baker (Fermilab), B. Berman (G. Washington), G. Bologna (Torino), E. Bonderup (Aarhus), S. Datz (Oak Ridge), J. Forster (Chalk River), F. Fujimoto (Tokyo), W. Gibson (Albany), I. Mitchell (Chalk River), Y. Ohtsuki (Waseda), R. Pantell (Stanford), S. Picraux (Sandia), J. Remillieux (Lyon), A. Saenz (NRL), V. Schegelsky (Gatchina), C. Sun (Albany), H. tiberall (Catholic U. ), E. Uggerh¢j (CERN), and R. Wedell (Humboldt). Others from across the spectrum of scientific disciplines agreed to serve as session chairmen.