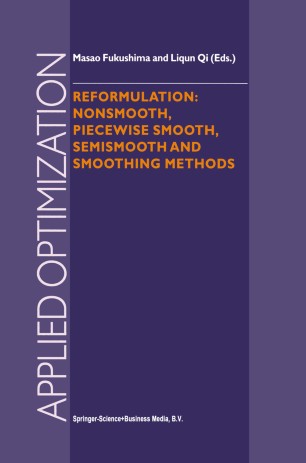 The concept of "reformulation" has long been playing an important role in mathematical programming. A classical example is the penalization technique in constrained optimization that transforms the constraints into the objective function via a penalty function thereby reformulating a constrained problem as an equivalent or approximately equivalent unconstrained problem. More recent trends consist of the reformulation of various mathematical programming prob­ lems, including variational inequalities and complementarity problems, into equivalent systems of possibly nonsmooth, piecewise smooth or semismooth nonlinear equations, or equivalent unconstrained optimization problems that are usually differentiable, but in general not twice differentiable. Because of the recent advent of various tools in nonsmooth analysis, the reformulation approach has become increasingly profound and diversified. In view of growing interests in this active field, we planned to organize a cluster of sessions entitled "Reformulation - Nonsmooth, Piecewise Smooth, Semismooth and Smoothing Methods" in the 16th International Symposium on Mathematical Programming (ismp97) held at Lausanne EPFL, Switzerland on August 24-29, 1997. Responding to our invitation, thirty-eight people agreed to give a talk within the cluster, which enabled us to organize thirteen sessions in total. We think that it was one of the largest and most exciting clusters in the symposium. Thanks to the earnest support by the speakers and the chairpersons, the sessions attracted much attention of the participants and were filled with great enthusiasm of the audience.