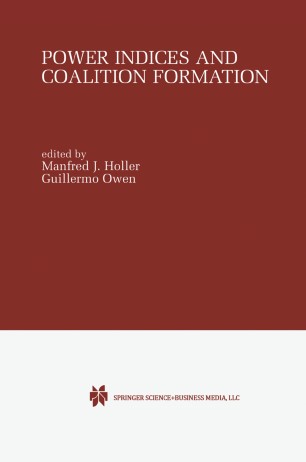 In recent years, publications on power indices and coalition formation have multiplied. Obviously, the application of these concepts to political institutions, more specifically, to the analysis of the European Union and, as it seems, the election of the President of the United States is getting more and more popular. There are, however, also new theoretical instruments and perspectives that support these applications: First of all, the probabilistic model of coalition formation has to be mentioned which is made operational by the multilinear extension of the characteristic function form of coalition games. This instrument triggered off a reinterpretation of existing power indices and the formulation of new indices. This development is accompanied by an intensive discussion of the concept of power in general - what do we measure when we apply power measures? - and the properties that an adequate measure of power has to satisfy. Various concepts of monotonicity were proposed as litmus test. The discussion shows that the underlying theories of coalition formation play a decisive role.
New results will be discussed in this volume. Its contributions put flesh and blood on the theoretical innovations and their applications that led to a growing interest in power indices and coalition formation.