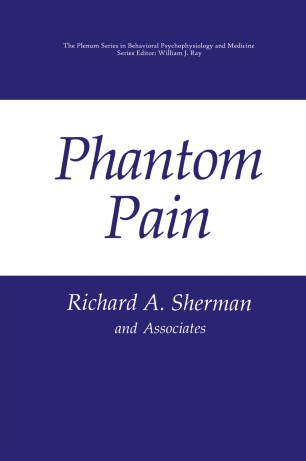 Phantom pain is an intriguing mystery that has captured the imagination of health care providers and the public alike. How is it possible to feel pain in a limb or some other body part that has been surgically removed? Phantom pain develops among people who have lost a limb or a breast or have had internal organs removed. It also occurs in people with totally transected spinal cords. Unfortunately, phantom pain is a medical night­ mare. Many of the people reporting phantom pain make dispropor­ tionately heavy use of the medical system because their severe pains are usually not treated successfully. The effect on quality of life can be devas­ tating. Phantom pain has been reported at least since 1545 (Weir Mitchell as related by Nathanson, 1988) and/ or experienced by such diverse people as Admiral Lord Nelson and Ambroise Pare (Melzack & Wall, 1982; Davis, 1993). The folklore surrounding phantom pain is fascinating and mirrors the concepts about how our bodies work that are in vogue at any particu­ lar time. Most of the stories relate to phantom limbs and date from the mid-1800s. The typical story goes like this: A man who had his leg ampu­ tated complained about terrible crawling, twitching feelings in his leg. His friends found out where the leg was buried, dug it up, and found maggots eating it. They burned it, and the pain stopped. Another man complained of a swollen feeling with frequent stinging or biting pains.