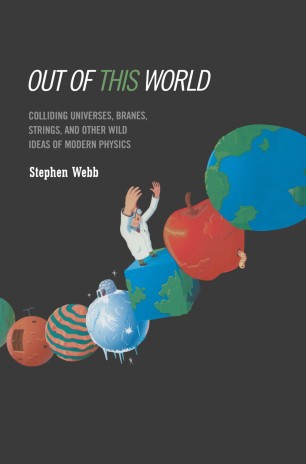 Out of this World

Seeing beyond the Big Bang. . .

Although it is now almost unanimously accepted that the cosmos started with the Big Bang, we still have no plausible theory for the forces that set this creative cataclysm in motion. Some of the most profound questions of modern science arise out of the difficulties scientists have explaining how our Universe was born. What happened, indeed what was, before the Big Bang? During the past few years cosmologists have begun to develop new ideas, sometimes fantastic, that are beginning to shed light on such questions.

In OUT OF THIS WORLD, Stephen Webb examines these amazing recent theories. After introducing general relativity and quantum mechnanics-the twin foundations of twentieth-century physics-he explains how they are fundamentally incompatible. Then, in a series of increasingly astonishing chapters, he introduces us to the seemingly outlandish and bizarre proposals-from almost unbelievably small particles to huge membranes that may envelope the Universe-that physicists have devised to account for this incompatibility, ultimately leading us to wholly new realms of understanding.

Webb makes these strange and wonderful goings-on accessible, engaging, and enjoyable, conveying not just what theorists have begun to believe about the cosmos, but the awe and excitement felt by scientists as this new picture of the Universe slowly emerges.