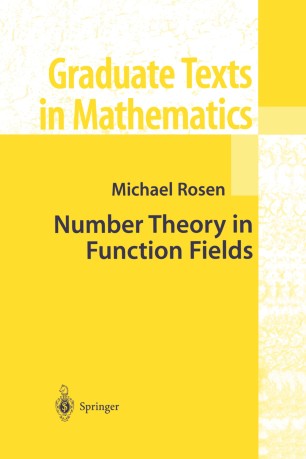 Elementary number theory is concerned with arithmetic properties of the ring of integers. Early in the development of number theory, it was noticed that the ring of integers has many properties in common with the ring of polynomials over a finite field. The first part of this book illustrates this relationship by presenting, for example, analogues of the theorems of Fermat and Euler, Wilsons theorem, quadratic (and higher) reciprocity, the prime number theorem, and Dirichlets theorem on primes in an arithmetic progression. After presenting the required foundational material on function fields, the later chapters explore the analogy between global function fields and algebraic number fields. A variety of topics are presented, including: the ABC-conjecture, Artins conjecture on primitive roots, the Brumer-Stark conjecture, Drinfeld modules, class number formulae, and average value theorems.
The first few chapters of this book are accessible to advanced undergraduates. The later chapters are designed for graduate students and professionals in mathematics and related fields who want to learn more about the very fruitful relationship between number theory in algebraic number fields and algebraic function fields. In this book many paths are set forth for future learning and exploration.
Michael Rosen is Professor of Mathematics at Brown University, where hes been since 1962. He has published over 40 research papers and he is the co-author of A Classical Introduction to Modern Number Theory, with Kenneth Ireland. He received the Chauvenet Prize of the Mathematical Association of America in 1999 and the Philip J. Bray Teaching Award in 2001.