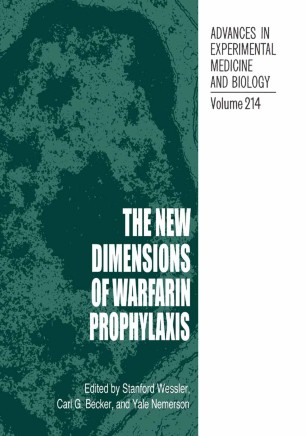 The New Dimensions of Warfarin Prophylaxis

The International Symposium on The New Dimensions of Warfarin Prophylaxis held on October 16-18, 1986 in New York City was conceived as a forum to bring together physicians and other scientists knowledgeable about the pharmacological effects of warfarin on the hemostatic mechanism and the clinical usefulness of this compound in the prevention of thromboembolic phenomena. The coumarin compounds have commanded a striking breadth of interest among members of the biomedical research community for almost one-half century. Aspects of its effects on the vitamin K-dependent proteins, on the laboratory recognition of the drug's pharmacologic action and its use as a therapeutic agent in a variety of disease states have been actively studied with increasing intensity in the past several decades. Thus, the present state of these studies seemed to be a timely subject for discussion, not only to gather together in one place representative samples of the myriad of data on warfarin, but also to underscore the ever increasing necessity for communication between basic research and clinical practice. The content and organization of this monograph reflect the scope and importance of warfarin prophylaxis. One of the unique aspects of this publication is that it spells out in one place the warfarin story from molecular biology through clinical trials to future directions of research and patient care.