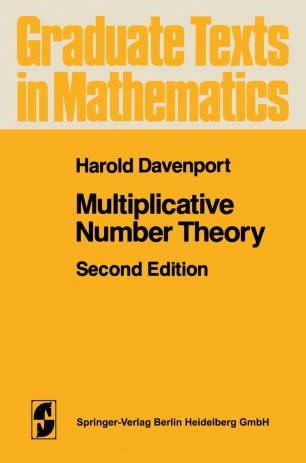 Although it was in print for a short time only, the original edition of Multiplicative Number Theory had a major impact on research and on young mathematicians. By giving a connected account of the large sieve and Bombieri's theorem, Professor Davenport made accessible an important body of new discoveries. With this stimula­ tion, such great progress was made that our current understanding of these topics extends well beyond what was known in 1966. As the main results can now be proved much more easily. I made the radical decision to rewrite §§23-29 completely for the second edition. In making these alterations I have tried to preserve the tone and spirit of the original. Rather than derive Bombieri's theorem from a zero density estimate tor L timctions, as Davenport did, I have chosen to present Vaughan'S elementary proof of Bombieri's theorem. This approach depends on Vaughan's simplified version of Vinogradov's method for estimating sums over prime numbers (see §24). Vinogradov devised his method in order to estimate the sum LPH e(prx); to maintain the historical perspective I have inserted (in §§25, 26) a discussion of this exponential sum and its application to sums of primes, before turning to the large sieve and Bombieri's theorem. Before Professor Davenport's untimely death in 1969, several mathematicians had suggested small improvements which might be made in Multiplicative Number Theory, should it ever be reprinted.