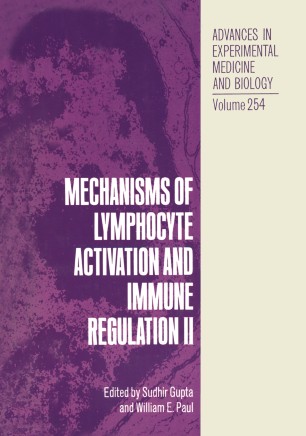 The ac ti vati on of Iymphocytes by physiologie ligands has become a central area of study for immunologists. Furthermore, Iymphocytes offer many advantages for the study of general aspects of receptor-mediated cellular activation. For these reasons, research on the cellular and molecular aspects of the activation of Iymphocytes by antigens, antigen analogues, Iymphokines and other growth factors has expanded enormously in the last several years. Aseries of conferences, "The International Conferences on Lymphocyte Activation", has been initiated to meet the growing need for a forum for the discussion of the topics that are included within the area of Iymphocyte activation. This volume represents the proceedings of the Second International Conference on Lymphocyte Activation and Immune Regulation, held on February 18-20, 1988 at Newport Beach, California. The proceedings comprise four major sections. The first deals with the T cell receptors and T cell activation. It includes a model for the T cell receptor interaction with a complex of MHC plus antigen, structure of y c'i T cell receptor and their distinct isotypic forms, the role of zeta chain in the expression and structure of T cell receptors and its role in transmembrane signalling. The use of somatic cell mutants in the study of signal transduction function of the T cell antigen receptors and the early and late steps of signal transduction via a / ß T cell antigen receptors are discussed.