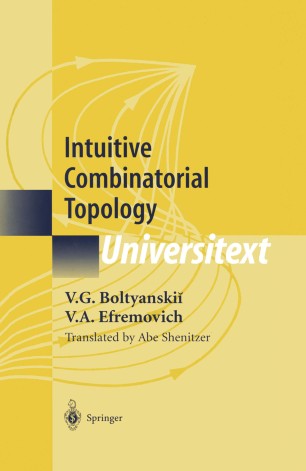 Topology is a relatively young and very important branch of mathematics. It studies properties of objects that are preserved by deformations, twistings, and stretchings, but not tearing. This book deals with the topology of curves and surfaces as well as with the fundamental concepts of homotopy and homology, and does this in a lively and well-motivated way. There is hardly an area of mathematics that does not make use of topological results and concepts. The importance of topological methods for different areas of physics is also beyond doubt. They are used in field theory and general relativity, in the physics of low temperatures, and in modern quantum theory. The book is well suited not only as preparation for students who plan to take a course in algebraic topology but also for advanced undergraduates or beginning graduates interested in finding out what topology is all about. The book has more than 200 problems, many examples, and over 200 illustrations.

"An introduction to the topology of curves and surfaces, homotopy and homology with an emphasis on concepts and motivation rather than on theorems and proofs. Accessible to non-mathematicians. Includes a section on topology in physics. Many problems and illustrations throughout." (American Mathematical Monthly, August/September, 2002)

"The discussion is clear and it is all superbly illustrated by 200 figures. … Overall I am happy to recommend this book as giving a good introduction to topology of the space we live in through combinatorial topology with some interesting excursions to some of the wild places." (David Gould, New Zealand Mathematical Society Newsletter, Issue 88, 2003)

"Intuitive combinatorial topology is conceived as a popular introduction to the aims, methods and concerns of topology. … The authors’ aim throughout this copiously illustrated book is to build intuition rather than go overboard on the technical aspects of the subject: this enables them to cover a lot of material … . I particularly liked the way in which certain themes recurred … . it does merit a place in the libraries … ." (Nick Lord, The Mathematical Gazette, Vol. 87 (509), 2003)

"The text is written in an enthusiastic and lively style. The proofs are given in detail, without prerequisites. In each part of the book, the reader will find numerous carefully illustrative examples. The book is well suited for advanced undergraduates or beginning graduates interested in finding out what topology is all about. The book offers 213 problems, gives 68 examples and is illustrated by over 210 figures." (Jozef Fiamcik, Zentralblatt MATH, Vol. 971, 2001)