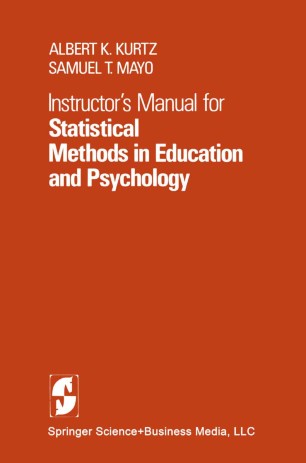 Instructor’s Manual for Statistical Methods in Education and Psychology

This Instructor's Manual consists of two parts, each arranged in the order in which the chapters appear in the text. The first part is a collection of over 500 test questions; the second gives answers to the questions in the Student Work­ book. Clearly, the Instructor's Manual should never be shown to students. Great care should be taken to see that no student (except a graduate assistant who needs it for scoring papers) ever gets to borrow it or, worse yet, to "borrow" it. Most of the test questions are multiple choice, but some matehing exercises are also included. Within each chapter, the multiple choice items are givenfirst. The text page on which the answer is found is given in ( ) at the right of the problem. The answer is indicated by a + sign at the left of the correct item alternative. In some items, parts of the item, especially in the wrong alternatives, may not appear untillater chapters. Such questions are clearly labelIed LATER by using LATER in place of a +and should not be used until all the material in them has been covered. They are OK for final examinations and for some rnidterm examinations, but they obviously cannot be used in their present form assoon as their prirnary topic has been covered in class. Tell your typist that when she prepares one of your tests, she should omit +, LATER, the parenthetical page numbers, and, of course, the answers to all matehing items.