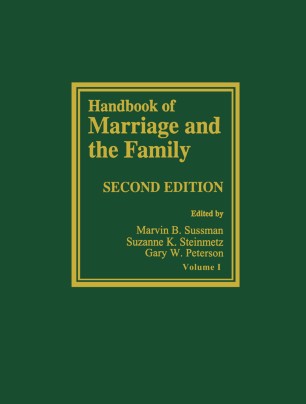 Handbook of Marriage and the Family

To know where we are going as scholars, educators, and practitioners in the field of marriage and family life, we first need to know where we have been. A perusal of early texts on marriage and family life provides some thought-provoking insights into the accuracy of the saying "what goes around, comes around. " It is interesting to note who has been considered to be in a position to provide information on marriage and family life. Included in the eclectic collection of texts we reviewed were ministers whose focus was on spirituality, doctors who emphasized medical aspects of child and adult health, and public health profes­ sionals and home economists concerned with fighting disease, who emphasized cleanliness, order, fighting germs, and eliminating rodents and insects. There are also philosophers who drew from ancient texts when discussing family life and a count who assembled a group of German intellectual elites to address various topics. An insightful essay of this type is by Marta Karlweis (1926), in which she notes: There is no other fetish that society holds to so firmly as the conception "woman," with all its usual associations of infantilism and dependence . . . . The child requires protection, is a minor and consequently a serf, but above all it possesses no spiritual existence. Neither doctorates or other distinctions nor the right to vote have as yet been able to dispel this sweet idea of the childishness of woman. which man cherishes. (p.