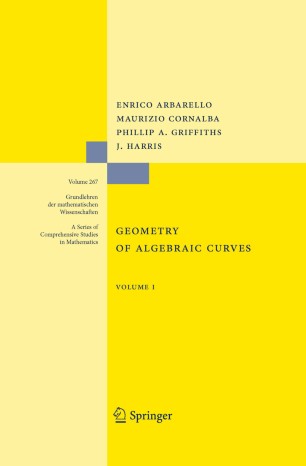 In recent years there has been enormous activity in the theory of algebraic curves. Many long-standing problems have been solved using the general techniques developed in algebraic geometry during the 1950's and 1960's. Additionally, unexpected and deep connections between algebraic curves and differential equations have been uncovered, and these in turn shed light on other classical problems in curve theory. It seems fair to say that the theory of algebraic curves looks completely different now from how it appeared 15 years ago; in particular, our current state of knowledge repre­ sents a significant advance beyond the legacy left by the classical geometers such as Noether, Castelnuovo, Enriques, and Severi. These books give a presentation of one of the central areas of this recent activity; namely, the study of linear series on both a fixed curve (Volume I) and on a variable curve (Volume II). Our goal is to give a comprehensive and self-contained account of the extrinsic geometry of algebraic curves, which in our opinion constitutes the main geometric core of the recent advances in curve theory. Along the way we shall, of course, discuss appli­ cations of the theory of linear series to a number of classical topics (e.g., the geometry of the Riemann theta divisor) as well as to some of the current research (e.g., the Kodaira dimension of the moduli space of curves).

“A comprehensive account of the deepest results of the geometry of algebraic curves that were obtained in the second half of the 20th century using some of the more advanced techniques of abstract algebraic geometry … . at the end of every chapter there bibliographical notes that guide the reader to the original literature and further developments and sets of exercises that complement the theory … . an immediate standard reference for researchers and students working on the geometry of algebraic curves … .” (Felipe Zaldivar, The Mathematical Association of America, July, 2011)