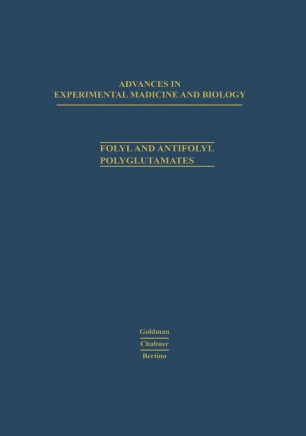 Part of the Advances in Experimental Medicine and Biology book series (AEMB, volume 163)

The role of folylpolyglutamates in biosynthetic processes has gained increasing importance with the recognition that these com­ pounds are not only the forms of folate co-factors that accumulate within cells, but, in addition, are the preferred substrates for folate dependent reactions in eukaryotic cells. More recently attention has turned to the potential importance of the polyglutamyl derivatives of methotrexate that have been detected in normal and malignant cells both in vitro and in vivo. The biochemical trans­ formation of this important chemotherapeutic agent is of particular significance since polyglutamyl derivatives of methotrexate are not only potent inhibitors of the target enzyme, but have quite different cellular pharmacokinetics than the parent monoglutamate. Hence, nearly three and a half decades after 4-aminoantifolates were first applied clinically in the treatment of human neoplasms, we have begun to appreciate a new dimension in antifolate pharmaco­ logy which may have profound implications for our understanding of the mechanism of the cytotoxicity and selectivity of this class of agents. With the development of highly sensitive methodology for the rapid detection of folyl and antifolyl polyglutamates, it is now possible to define in depth the intracellular transformation of these agents and their role in determining antifolate action against normal and malignant cells. This information will very likely influence how regimens with methotrexate and related antifolates will be further developed and employed clinically.